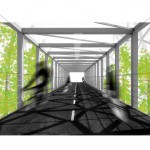 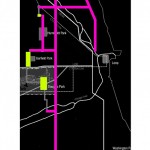 Chicago’s got a great and growing bicycle culture, but there are still people who refuse to take to the streets for a variety of reasons. A lot of these hesitations center around safety. One far-out idea to remedy this concern would be to build bicycle portals or highways centered in the middle or side of Chicago’s busiest boulevards. My design features a 12′ wide bike path, on and off ramps, and lots of green screens. The finished bike highways would link various parks and city attractions and their final design would very much resemble a tree lined center median. I imagine a lot of their funding would be through subsidies but much of it could come from the users, buying a pass or paying at each entrance ramp. This is obviously very conceptual at this point, but more images may be added in the future.